Sacred Geometry is an ancient science with links to religious, philosophical and spiritual beliefs as well as to classical geometry and appears throughout all cultures in human history. In simple terms, it explores and explains energy patterns that create and unify all things in our universe. It is the essence of Creation, and provides a way of understanding how the universe is designed.

Many mystical and spiritual practices, such as astrology, tarot, numerology or even feng shui, include a fundamental belief in sacred geometry. Architects and designers can use the concepts of sacred geometry when they choose particular geometric forms to create pleasing buildings or structures.

Everywhere we look, we can see different shapes, patterns and structures which make up our natural world, and all of which according to Scared Geometry, can be determined by certain mathematical and geometric constants. For example, we can see evidence of the same geometric patters in objects such as the Passion flower or the spiral of snail shells etc. 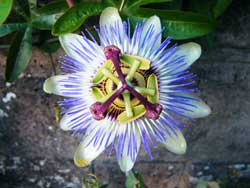 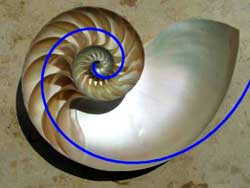 When we look at the chambered nautilus, we know it grows at a constant rate and so its shell forms a logarithmic spiral to accommodate that growth without changing shape. We also know that honeybees construct hexagonal cells to hold their honey, why hexagonal? These and other similar circumstances are seen by believers in sacred geometry to be further proof of the cosmic significance of geometric forms.

Believers feel that Sacred Geometry was used foundationally in buildings such as temples, mosques and churches and in some religious art.

According to Michael Schneider, author of "A Beginner’s Guide to Constructing the Universe," modern scientists are reaffirming what the ancients observed in their world and taught in their myths: that a consistent language of geometric design underpins every level of the universe, from atoms through to galaxies.

As far back as 2500 years ago it was taught that there are five perfect 3-dimensional forms - the tetrahedron, hexahedron, octahedron, dodecahedron, and icosahedron. These are more commonly known as the Platonic Solids; and these form the foundation of everything in the physical world.

According to Greek culture, each platonic solid represents one of the five elements of creation: 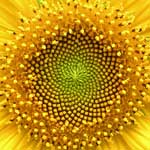 Toroids (also seen as the Tetrahedron) play a large part in Sacred Geometry, as they create the spiral form, which is commonly seen within this field. The best way to describe a Toroid is simply by looking at one. They are repeated circular rotations, with each circle meeting at the centre. A natural example would be the patterns of seeds on the head of a sunflower, or if you can remember Spirographs as a child, that can also give a good you a representation.

One will notice with these patterns that they are very soothing to our psyche. Looking at them can often bring about a feeling of well being and familiarity.

Believers of sacred geometry feel that these five Platonic solids comprise the alchemical dance of the elements and of Creation itself. We can apply each shape to almost anything in our natural world.

One of the most profound and significant activities encompassed within sacred geometry is the 'Golden Ratio', ‘Golden Mean’ or ‘Golden Proportion’. The easiest explanation of this is merely to describe it as a specific number: 1.6180339887. However, to fully understand its uniqueness we need to look at it as a ratio – it can be described as the unique ratio such that the ratio of the whole to the larger portion is the same as the ratio of the larger portion to the smaller portion. It is sometime useful to view it as an equation:

The Golden Mean was used in the design of sacred buildings in ancient architecture to produce spiritual energy that facilitated connectivity with spiritual realms through prayer. Believers feel that geometry is the very basis of our reality, and hence we live in a coherent world governed by unseen laws.

The understanding of geometry as the initial base of our existence is an ancient belief and in fact the Golden Mean and other similar forms of geometry can be seen embedded in many of the ancient monuments that still exist today.

The Great Pyramid at Giza provides us with a perfect example of this. The height of this pyramid is in Phi ratio (e.g. the Golden Mean Ratio) to its base. In fact, the geometry in this particular structure is far more accurate than that found in any of today's modern buildings.

Even in today’s existence, the golden ratio is used in the analysis of financial markets, in strategies that use the Fibonacci sequence.

Leonardo Fibonacci, who was a very famous mathematician, created the Fibonacci sequence and it is this numerical sequence which is found frequently in the natural world. As many people know, the Fibonacci sequence is a sequence, where by adding the last two numbers together, creates the next number (1,1,2,3,5,8,13,21,34,55). If we then divide any number by the one before it we always end up with the Golden mean: 1.6180339887.

As well there is a basic belief that geometry and mathematical ratios, harmonics and proportion are also found in music, light and cosmology.

The discovery of the relationship of geometry and mathematics to music is attributed to Pythagoras, who found that a string stopped halfway along its length produced an octave, while a ratio of 3/2 produced a fifth interval and 4/3 produced a fourth. Pythagoreans believed that this gave music healing powers, as it could "harmonize" the out-of-balance body, and this belief has been revived in modern times. Pythagoras described geometry as visual music; which, as musicians understand, is created by applying laws of frequency and sound in certain ways.

Leonardo Da Vinci understood that Man was intended in the proportion of Phi and indeed much of the natural world was Phi based. In the anatomy of Man, the spinal vertebrae are relative to each other in the Phi ratio. Plants and trees grow in the Phi ratio. The sunflower is a very good visual example of the spiralling effect of Phi. 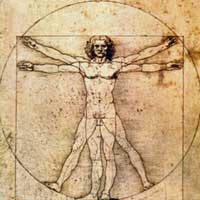 Through the study of Sacred Geometry we can discover the balance and harmony that can exist in any situation and even the circumstances of our day-to-day life. By seeing and working with the world as a unity, we can begin to lose the false notion of separateness between man and nature and from one human to each other.

A Beginner's Guide to Constructing the Universe: The Mathematical Archetypes of Nature, Art, and Science – A Voyage from 1 to 10 by Michael S. Schneider - This is the best introduction to the principles of sacred geometry on the market. It is fascinating and accessible.

Sacred Geometry by Robert Lawlor - Rather advanced articulation of sacred geometry. There are some workbook lessons at the end. This is a hard read. It is found in the mathematics section at book stores.

Sacred Geometry by Nigel Pennick - An interesting though far from exhaustive overview of the subject.

The Geometry of Art and Life by Matila Ghyka -Includes some mathematics and algebra. More geometry oriented than some books on the subject.

Order in Space by Keith Critchlow - An out-of-print introduction to the Platonic solids, three-dimensional geometry.

The Geometry of Whole movement: Folding the Circle for Information by Bradford Hansen-Smith - A fascinating study of geometry by folding paper plates (or any paper circle), showing that everything originates from the circle.

The Power of Limits: Proportional Harmonies in Nature, Art, and Architecture by György Doczi - Discovering the geometry that surrounds us everywhere.