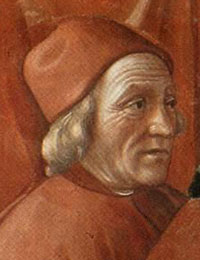 Marsilio Ficino was born at Figline Valdarno, near Florence. His father, Diotifeci, was a physician who treated the great Cosimo de' Medici, the de facto ruler of the republic of Florence. Ficino relates a tale of his father receiving a dream vision that inspired him to cure a patient for no charge, and Ficino's mother, Alessandra, had the gift of second sight.

Ficino studied medicine at Bologna, and in later years practised as a doctor to his friends and acquaintances. He also received the standard education of the times in Aristotelian philosophy and humanistic disciplines, attending the universities at Pisa and Florence (the Studio). His teacher of philosophy in Florence was the famous Aristotelian Niccolò di Tignosi da Foligno.

Ficino abandoned the study of medicine without taking his degree, realising that his natural talents lay in theology and philosophy. Attracted as he was to the pagan Greek philosophers, Ficino seems to have been drawn further and further away from Christian orthodoxy, so much so that he suffered a crisis of conscience. In later years he told his friends that the Chancellor of the Studio, St. Antoninus (canonized 1523), providentially intervened and brought back his pupil to Christianity by ordering him to read Aquinas' Summa contra Gentiles.

In this tale we can see the beginning of Ficino's life work: to reconcile the philosophy of the ancient world (Plato representing its highest achievement) with the Christian religion. We also catch a glimpse of his conviction that Divine Providence had chosen him for this momentous task. As Ficino's reading widened and his understanding developed, his task grew as well, until he conceived the idea of a single ancient theology or prisca theologia passed down a 'golden chain' (aurea catena) of ancient sages and culminating in the revelations of Christianity. The chain comprised both real and mythical characters: Zoroaster, Hermes Trismegistus (who was believed to be a contemporary of Moses), Orpheus, Aglaophemus, Pythagoras and Plato.

The young Ficino was clearly cut out for intellectual pursuits. At the age of only eighteen he was supporting his studies by tutoring the thirty-five year old patrician Piero de' Pazzi. By 1466 he was receiving a small salary for lecturing on philosophy at the Studio. Given these facts together with his father's close link to Cosimo de' Medici, it is perhaps not surprising that when Cosimo came into possession of a rare manuscript containing virtually the complete works of Plato (several of which had been lost to western Europe), he turned to Ficino to translate them. Ficino had to learn Greek for the purpose, and he translated into Latin, the language of educated men of the time.

He started work in 1463 and did not finish until about seven years later. The complete translation was published in 1484, some of the Platonic Dialogues being supplemented by full-scale commentaries. This is perhaps Ficino's greatest achievement, and was certainly seen as such at the time. Ficino wrote that while his father Diotifeci had taught him the cure of bodies, Cosimo had brought him to Plato, who taught him the cure of souls. His recovery of Platonic philosophy has reverberated through European culture and education ever since.

However, before Ficino could finish his massive work of translation, Cosimo received a manuscript of most of the Corpus Hermeticum. Believing this work to pre-date Plato, and aware that his own death was near, Cosimo ordered Ficino to break off and translate the Corpus instead. This Ficino did, going on to tackle many more obscure and esoteric texts, largely by Neoplatonists including Plotinus, Proclus, Porphyry, Synesius and Michael Psellus. Many of Ficino's translations remained as standard until the nineteenth century.

Cosimo and his successors supported Ficino financially during his labours. Cosimo gave Ficino a small farmhouse near the Medici villa at Careggi, to which he retired regularly to write. After Cosimo's death in 1464, his son Piero arranged Ficino's appointment as lecturer at the Studio. Following Ficino's ordination in 1473, Piero's son Lorenzo il Magnifico gave him two small ecclesiastical benefices. In 1487 Ficino was created a canon of Santa Maria del Fiore in Florence, and Lorenzo recommended him (unsuccessfully) for the bishopric of Cortona.

However, Ficino's relationship with Cosimo's descendants was not always easy. In 1478 he was implicated in the Pazzi conspiracy against Lorenzo and his brother Giuliano, in which Giuliano was murdered. Ficino had been a regular correspondent of some of the conspirators and for a while his position in Florence was uncomfortable. His close friends, the Valori family, increasingly took over the responsibilities of patronage, financing the publication of Ficino's books and offering powerful protection.

The fact that Ficino cultivated friendships across political boundaries indicates how wide his circle of friends was. Indeed, his voluminous correspondence (published in twelve volumes in 1495) has been called the finest introduction to the intellectual life of fifteenth century Western Europe. The Hungarian king Matthias Corvinus twice invited Ficino to join his court, in 1479 and again in 1482.

In Florence, Ficino was at the centre of a circle of intellectuals and he was once thought to have set up an Academy in emulation of his hero Plato. In recent years the existence of the Academy has been questioned, with suggestions that it refers not to a group of Platonists but to Ficino's volumes of Plato. What is certain is that Ficino and his friends annually held a celebratory banquet to honour Plato on 7 November, which they believed to be Plato's birthday.

One of these banquets is given fictional form in Ficino's De Amore (1469), in which he depicts some of his friends giving speeches about love that form a commentary on Plato's Symposium. Ficino stated that he wrote this extended meditation on love at the suggestion of his beloved Giovanni Cavalcanti, who hoped it might help Ficino come to terms with his deep feelings for his younger friend.

The result is that Ficino introduced the idea of Platonic love into Western thought, although his original meaning is far more profound than the way the term is now used. His amor platonicus binds two souls together spiritually in a mutual search for union with God, the ultimate destination of the soul that alone will fully satisfy it. This concept proved immensely influential in Western culture, and following its publication in 1484 De Amore inspired a flood of imitative handbooks on love.

The other area of thought in which Ficino's influence is extremely important is that of theology, since he is largely responsible for the Christian church adopting the doctrine of the soul's immortality. In his major work Theologia platonica, de immortalitate animorum (published 1482), Ficino not only presents his arguments for the reconciliation of Platonic thought with Christianity, but also offers proofs drawn from Plato and other sources for the immortality of the soul. During the Fifth Lateran Council (1512-17), Pope Leo X, who as Giovanni di Lorenzo de' Medici had been a pupil and correspondent of Ficino, affirmed the soul's immortality as Christian doctrine.

De vita libri tres (Three Books on Life) or De triplici vita, written in the years 1480–1489 by Marsilio Ficino. First circulated in manuscript form, then published on December 3, 1489. It was constantly in print through the middle of the 17th century. (Wikipedia)

However, Ficino's position as a Christian priest who advocated pagan philosophy, used magic and practised astrology caused some to doubt the orthodoxy of his beliefs. In 1489 he published – not without some anxiety – a compendium of advice on physical and spiritual health, the Liber de Vita in Tres Libros or Three Books on Life. This included instructions on making talismans, identifying one's daemon and using planetary influences.

Despite several assurances in the text that Ficino advocated nothing that the Church would not approve, the Roman Curia looked unfavourably on the work. However, Ficino's influential friends came to his aid. His own bishop, Rainaldo Orsini, intervened, and the great Venetian scholar and diplomat Ermolao Barbaro also seems to have swayed Pope Innocent VIII in Ficino's favour.

Although Ficino was circumspect about his magical activities, he was proud of his powers of exorcism and believed himself to have prophetic ability. Ficino used the Orphic Hymns, considered to be immensely potent for magic, and was known amongst his friends as the Second Orpheus. He was accomplished on the lyre, and composed astrological songs for therapeutic use.

Ficino also revived (or invented) Orphic dancing, a whirling movement intended to draw down benefic planetary influence. All Ficino's work – philosophical, religious, magical and astrological – had one single aim: to bring the soul close to God. Ficino's influence on the development of magic was considerable, passing into popular practice through Cornelius Agrippa (1486-1535), who based much of his writing on Ficino's work. However, Ficino's emphasis on spiritual aspiration did not prove attractive to many later magicians.

Ficino's importance to astrology lies in the extent to which he moved away from mediaeval predictive practice. He saw the planets as archetypal gods present in every area of life, and believed that astrology should be used imaginatively to harmonise the individual life with the divine patterning of the cosmos. Although on occasion he offered predictions, he was the first astrologer to focus on the inner life of the individual.

Ficino's attempts to make the most of his own horoscope almost certainly influenced him in that direction. His interpretation of Saturn as the planet of divine affliction was hugely influential amongst intellectual and creative circles, becoming an essential element in the image of the tortured artist cultivated by Michelangelo and others.

Ficino identified Saturn's influence in the constant ill-health he suffered, the melancholy to which he often fell prey and his habitual lack of money. In person he was small and frail, and often made this the subject of punning wit in his letters. In 1474 he was so ill he feared for his life, but he recovered after praying to the Virgin Mary. In later years he suffered from cataracts.

Ficino treated his own melancholy and that of others with music on his lyre, and he recommends drinking wine frequently (although in moderation). His affectionate nature, witty and intelligent conversation and generosity in helping and advising others ensured him the love and loyalty of many friends and admirers.

Ficino's poverty was exacerbated when one of his brothers died and he took his nieces and nephews into his own household. Used himself to living frugally, he was well aware that he could not impose the same on his dependents, especially the young women who needed dowries. Ficino kept on writing until the end of his life, even in the unsettled atmosphere of Florence after Lorenzo died, the monk Savonarola came to power and the French king Charles VIII invaded the city. During the last three or four years of his life Ficino was composing commentaries on the Christian Platonist Dionysius the Areopagite and St. Paul's Epistle to the Romans.

Ficino summed up his philosophy in a motto:

The Letters of Marsilio Ficino. Trans. members of the Language Department. London: Shepheard-Walwyn, 1975-. 8 vols to date.